Infinite love already exists in everything that is alive, including you and me. Our love lessons are about removing the obstacles to love. They teach us out how to access, express and live it, if we choose to do so.

Fear, anger, prejudice… there are a myriad of padlocks with which we hold our love hostage. The experiences we have around love are all opportunities for self-examination. They teach us how to love better.

This can feel difficult in a world that is expressing so much dissension and “un-love”. Each of us is a key to healing it. Consider that perhaps the high tension and hatred being expressed in the world right now is a challenge to unlock our own love. Change begins within each of us.

“Your task is not to seek for love, but merely to seek and find all the barriers within yourself that you have built against it.” (Rumi)

Physical beauty. It’s still often one of the most highly valued attributes in our society, and particularly in women. Of course, beauty is a wonderful thing to behold and enjoy. But are you aware of positive deeper attributes we automatically apply to an attractive face?

Here’s a great Psychology Today article on beauty and its effect on our psyche: The Surprising Power of a Beautiful Face. A short quote: “[what psychologists call] the halo effect causes one trait (e.g., beauty) to drastically color your perception of all other traits. If you think someone is beautiful, you are also likely to assume they’re smart, ambitious, interesting, etc. We’ve all made these assumptions before, for good or ill.”

We are hard-wired to judge based on appearances

The assumptions we make are evidently hard-wired labels in our brains. So we can be forgiven – at least a little bit. As an interesting exercise, the next time you see a beautiful or handsome face, observe your thought process. Do you quickly assume the person is also intelligent, educated, polite, nice, etc?

Aphrodite, the Greek goddess of beauty and love, is laughing in her heaven. She knows, beauty has exerted power for eons.

“We delight in the beauty of the butterfly, but rarely admit the changes it has gone through to achieve that beauty.”
~ Maya Angelou

“The future belongs to those who believe in the beauty of their dreams.”
~ Eleanor Roosevelt

“The best and most beautiful things in the world cannot be seen or even touched. They must be felt with the heart.”
~ Helen Keller

“Life becomes easier and more beautiful when we can see the good in other people.”
~ Roy T. Bennett

“Dwell on the beauty of life. Watch the stars, and see yourself running with them.”
~ Marcus Aurelius

“The Earth laughs in flowers.” Wildflowers in a field, what a wonderful symbol of the joy of nature and the Earth! When I read Emerson’s words, I cannot help but smile inside. They lift my heart, for flowers are a precious gift. Their heady fragrances and gorgeous colors soothe our aching souls.

We need the healing power of nature now more than ever. The Earth is devoted and steadfast with her gifts. In a world that feels increasingly troubled, flowers help us reconnect to our inherent joyful soul center.

“To see a World in a Grain of Sand
And a Heaven in a Wild Flower,
Hold Infinity in the palm of your hand
And Eternity in an hour.”
~ William Blake

“You can cut all the flowers but you cannot keep Spring from coming.”
~ Pablo Neruda

“Raise your words, not voice. It is rain that grows flowers, not thunder.”
~ Rumi

“Normality is a paved road: It’s comfortable to walk, but no flowers grow on it.”
~ Vincent van Gogh

“If you love a flower that lives on a star, it is sweet to look at the sky at night. All the stars are a-bloom with flowers…”
~ Antoine de Saint-Exupéry

Mighty Chimborazo! If you have never heard of it, Chimborazo is a dormant volcano, the highest mountain in Ecuador, and the highest peak near the equator. At 20,548 ft., its summit is the farthest point on the Earth’s surface from the Earth’s center. The indigenous in Ecuador have dubbed Chimborazo “Taita”, meaning father.

Chimborazo takes my breath away

Two years ago I was fortunate to visit Chimborazo National Park. A guide drove our little group about three-quarters of the way up the mountain to a rest station, at about 16,000 ft. We got out of the van to walk around, and we all experienced dizziness and shortness of breath with very little exertion.

I was quite frankly in awe of the power and majesty of this mountain, and also the fact that one of my friends had (on a whim!) climbed from base to summit some years ago. What an accomplishment! Our guide told us that this is one of the most dangerous mountains in the world and other climbers have perished attempting to conquer it.

The feeling of freedom

As I stood at our rest point and gazed upward to the summit, my spirit soared. I have experienced this at other spectacular nature spots in my travels. I was lost in the magnitude and grandeur of the space. In that moment, I was simply a human being connected to the Earth, unencumbered by what I am required to be in our civilization.

It was just the sky, Chimborazo, and me.

And my spirit felt free.

More in Chimborazo here: Mount Chimborazo is Actually the Highest Point on Earth

Feeling a sudden urge to climb Chimborazo? A few tips for you: Chimborazo 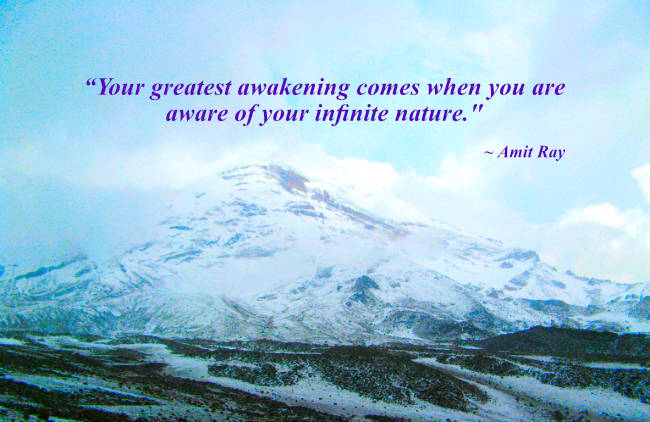 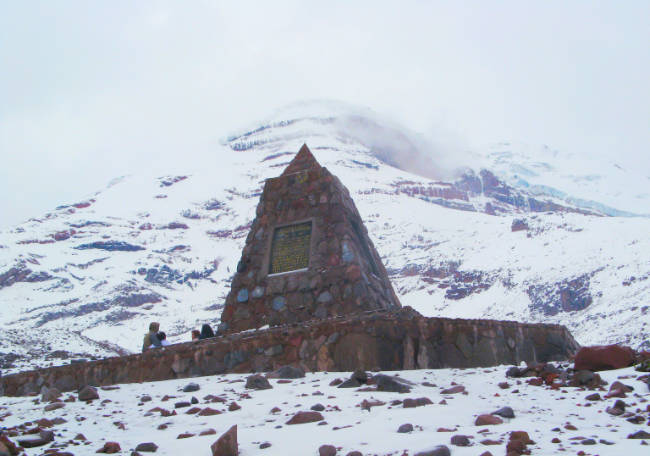 There is something about moonlight that is quite magically mesmerizing. We can feign disinterest all we want, but our attraction is undeniable. We are beguiled in spite of ourselves, falling for the moon’s magnetic charm time and again.

When you think about it, what else evokes romance that is quite like moonlight? I speak not simply of love or lust, but also the quicksilver beauty of everything the Goddess touches.

She weaves her spell, reviving the mystery and magic of life. Just as the Sun nourishes and energizes, the Moon soothes and sparks our dreams.

No wonder the lake prince adores her. Which does beg the question, does she love him in return, or, just herself in his mirror? 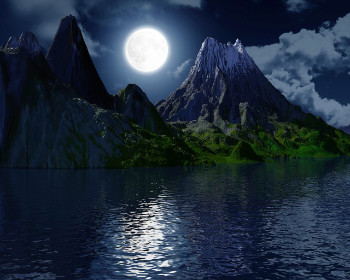 “Yes: I am a dreamer. For a dreamer is one who can only find his way by moonlight, and his punishment is that he sees the dawn before the rest of the world.” ~ Oscar Wilde

“But Paris was a very old city and we were young and nothing was simple there, not even poverty, nor sudden money, nor the moonlight, nor right and wrong nor the breathing of someone who lay beside you in the moonlight.” ~ Ernest Hemingway

“Man is the candle light and a woman is the moonlight. They live far away but can grow together during lonesome nights. ” ~ Santosh Kalwar

“I’ll come to thee by moonlight, though hell should bar the way.” ~ Alfred Noyes

“She would be half a planet away, floating in a turquoise sea, dancing by moonlight to flamenco guitar.” ~ Janet Fitch

“There is an ecstasy that marks the summit of life, and beyond which life cannot rise. And such is the paradox of living, this ecstasy comes when one is most alive, and it comes as a complete forgetfulness that one is alive. This ecstasy, this forgetfulness of living, comes to the artist, caught up and out of himself in a sheet of flame; it comes to the soldier, war-mad in a stricken field and refusing quarter; and it came to Buck, leading the pack, sounding the old wolf-cry, straining after the food that was alive and that fled swiftly before him through the moonlight.” ~ Jack London, Call of the Wild

Take at least a few moments today to dwell on the beauty of life. It’s all around us, all the time, but we are often too overcome with our personal daily work and problems or the ugliness in the news to notice it.

“Take time to smell the flowers” is such a well-known phrase, I suppose it may be almost cliche. However, how many of us actually live it? Intentionally taking notice of life’s beauty is a regular habit we would all benefit from cultivating.

Life is a precious gift. When we notice the beauty and feel gratitude for it, we are essentially saying thank you for that gift. Gratitude is a great amplifier. That which we focus on expands and ripples outward.

Not only do we give ourselves a much needed healing elixir, but we raise our vibration and people around us feel it. Just one more seemingly small way (but it’s huge!) that we can heal the world around us.

“To do the useful thing, to say the courageous thing, to contemplate the beautiful thing: that is enough for one man’s life.” ~ T.S. Eliot

“Unexpected intrusions of beauty. This is what life is.” ~ Saul Bellow

“At some point in life the world’s beauty becomes enough. You don’t need to photograph, paint, or even remember it. It is enough.” ~ Toni Morrison

“Let the beauty we love be what we do. There are hundreds of ways to kneel and kiss the ground.” ~ Rumi

“All the variety, all the charm, all the beauty of life is made up of light and shadow.” ~ Leo Tolstoy

“You must give everything to make your life as beautiful as the dreams that dance in your imagination.” ~ Roman Payne

Are you aware of deeper positive character attributes we automatically apply to an attractive face?

Here’s a great Psychology Today article on beauty and its effect on our psyche: The Surprising Power of a Beautiful Face. A short quote: “[what psychologists call] the halo effect causes one trait (e.g., beauty) to drastically color your perception of all other traits. If you think someone is beautiful, you are also likely to assume they’re smart, ambitious, interesting, etc. We’ve all made these assumptions before, for good or ill.”

We are hard-wired to judge based on appearances

The assumptions we make are evidently hard-wired labels in our brains. So we can be forgiven – at least a little bit. As an interesting exercise, the next time you see a beautiful or handsome face, observe your thought process. Do you quickly assume the person is also intelligent, educated, polite, nice, etc? Aphrodite, the Greek goddess of beauty and love, is laughing in her heaven. She knows, beauty has exerted power for eons.

Beauty is a big subject, with many facets (faces?) to be explored. For example, historically physically attractive politicians in public office seem to be more easily trusted by the population. Particularly in these cases, it behooves us to look deeper. These are people who are steering public policies and our future.

“It is amazing how complete is the delusion that beauty is goodness.” ~ Leo Tolstoy