Do you feel your connection to Earth? Her heartbeat is connected to us in ways that are only starting to be understood. More scientifically called the Schumann Resonance, this “heartbeat” is an electromagnetic wave that circles Earth’s circumference. It is closely connected to and communicates with our brains.

This from a Gizmodo post, The Earth has a heartbeat we can see from space:

“The wavelength is the circumference of the earth (or twice the circumference, or three times, or four, and so on). This means that the troughs of these waves will always line up, as will the crests. When crests combine, they get bigger. And with lightning hitting the earth over four million times a day, these waves keep getting the boosts they need. The waves don’t sweep across the surface of the earth. Instead they’re like standing waves, that just pulse at their troughs and crests – a resonant heartbeat.”

The Schumann Resonance (the base atmospheric electromagnetic resonant frequency is 7.83 Hz) is closely in sync with our Alpha brain waves (8 to 12 Hz). Alpha waves “are dominant during quietly flowing thoughts, and in some meditative states. Alpha is ‘the power of now’, being here, in the present. Alpha is the resting state for the brain. Alpha waves aid overall mental coordination, calmness, alertness, mind/body integration and learning.” (From What are Brainwaves? – Brainworks, Train Your Mind.)

The scientific study of the full effects of interference with the Shchumann Resonance ELF waves on our well-being is still in its infancy. But, studies to date suggest that when human vibration is out of sync with the Earth’s resonant heartbeat, we are not in a prime state of health. There are many articles outlining the interference and possible detrimental effects played by our synthetic technologies. There are also theories that staying in alignment could play an important part in the future expansion of our collective human consciousness.

But, why not let yourself be the judge? Start noticing how you feel when you spend too much time around TV, computers, cell phones, etc. And comparatively, the next time you’re out in nature, really tune in to how the images, colors, and sounds are affecting your mind and body.

Listen to the Earth’s heartbeat. She is communicating with you, so get to know and feel her language. Whether you realize it or not, she is calling you back to your organic essence. 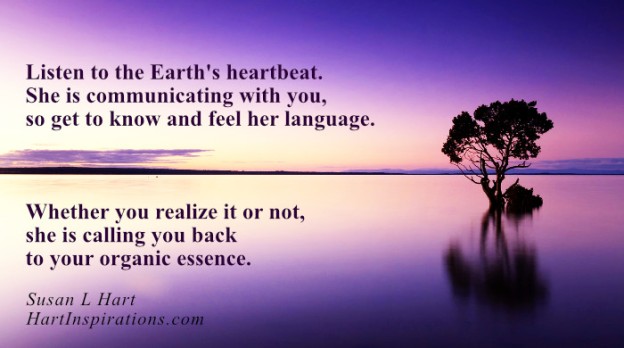 6 thoughts on “Her Heartbeat is Ours”