Life is full of choices, and oh if we could look down the road to see the outcome of each path before we make them! As the saying goes, “hindsight is 20-20”. Currently humanity is faced with many choices, and including a big one on which our very destiny depends. I explore this theme in my fiction satire story, “The Land of Small: A Timely Tale of Humanity’s Destiny”. Here’s the beginning, and the full story in ebook format is free.

Once upon a time (actually, many times in history), there was a little man who ruled his kingdom with an iron fist. His birth name was Tyrannicus Rex, but he liked to go by “Tyrannicus Rex, Your Royal Highness, Supreme Ruler of The Land of Small”.

Tyrannicus did not require that people also state his number in the long ancestral line of Tyrannicus Rexes. After all, he did not want his name to be unnecessarily long or cumbersome for his subjects to say. It was just one of the countless ways he showed magnanimous consideration for The People of the Land of Small.

In actual fact, no one could remember how or why or when the family came about. The last Tyrannicus Rex Family Record Book had apparently burned in a mysterious fire about twenty years back, just after Tyrannicus’s father passed away and left his son to rule the kingdom.

An old-timer of the kingdom had heard a rumor that the fires happened regularly, always apparently just after the last King died. No one really knew if that was true, but it apparently it was a Rex family curse.

Everything in the Land of Small was, of course, small. The Tyrannicus Rexes preferred it that way, as they were all quite small in stature, so anything too big threatened their self-confidence. In the Land of Small, it was all small houses, small food, small entertainment… you get the picture. That is, with one exception.

There was a very tall (one might say gargantuan) ancient-looking tree that stood smack dab in the center of the kingdom’s main square. This tree definitely did not fit the royal requisite of small. It was so perfectly positioned that there was hardly a soul in The Land of Small who had not seen or heard tell of that tree at one time or another. It was legendary.

Tyrannicus hated that tree with a vengeance. He and the other Tyrannicus Rexes before him had tried cutting it down, digging it out, and burning it, but that darned tree refused to go away. Trying to get rid of the tree proved to be a bad plan, because the more the Tyrannicus Rexes tried to remove it, the more The People of the Land of Small noticed the tree.

You, dear reader, know all too well how that goes. It is sometimes very difficult to stop looking at an eyesore. There it stood in the center of the kingdom, broken, charred, and scarred. It almost made people feel sad, and yet it didn’t.

This tree exuded a demeanor relentlessly proud. In a strange way, the tree gave the people a feeling of hope that there was something beyond smallness. Over many generations, small had become quite wearisome. It was boring, and well, small. Of course it was against the rules to think about anything outside of small, so it was best to keep those feelings to one’s self.

The biggest problem with the tree (for Tyrannicus) was, of course, that it was altogether contrary to The Rule of Small. Here was an object that defied The Tyrannicus Rex Official History of The Land of Small (kept in a special hall, separate from The Tyrannicus Rex Family Record Book for safe keeping), which stated that everything in The Land of Small had always been small, and in fact, small was the most natural thing in the world. What other way could or should it be? If the history books said it was so, then it must be so.

The narrative of small may have stuck ad infinitum, except for that darned tree. For reasons Tyrannicus could not fathom, more and more the people were beginning to question it. If everything had always been small, and it was natural to be small, then why was that mysterious huge tree in the middle of the square? Where did it come from?

It was not man-made; it was a tree for heaven’s sake, and a tree (being of Nature) was about as natural as you could get. Beyond that, why were the Tyrannicus Rexes so obsessed with removing it? Secretly The People of the Land of Small loved that sad, big tree, so it did raise questions.

To say that this whole situation was very irritating to Tyrannicus would be a massive understatement. He just wanted to live the easy life, but when the people questioned, this required making up new rules. Rules took time to make and enforce, but what else was one to do? It was exhausting, really.

Tyrannicus decided to delegate some of the rule making work. At first it started small, just a couple of people to oversee The Records of Rules of the Land of Small. They’d come to work and pore over the existing records, and then they’d put their heads together to suggest some new rules for the King to edict.

He was very pleased with their work. What he noticed right away was that as The Committee of Rules for the Land of Small made up new rules, it was pretty much impossible to publish them daily. The People of the Land of Small would dutifully wait for the next proclamations, but if they happened to miss an announcement and accidentally break a new rule, it wasn’t his fault, was it?

He hired more rule advisors, and rule making took on a life of its own in the kingdom. The people were now more fearful, which worked in Tyrannicus’s favor. They were so preoccupied trying to keep track of the new rules and the fines they might get if they broke them, they almost stopped thinking about the big tree in the square. Almost… but Tyrannicus would soon discover that in another part of The Land of Small, Nature was conspiring against him…

The Land of Small: A Timely Tale of Humanity’s Destiny @ 2022 Susan L Hart (The Land of Small is a work of fiction. Any resemblance to actual persons, living or dead, or actual events is purely coincidental.) 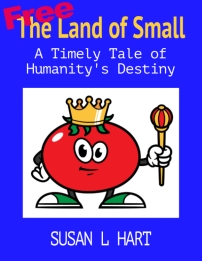